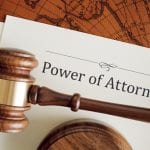 As many people have realized, even a properly prepared and executed power of attorney can be rejected or question by a third party, such as a bank or insurance company.  Those entities may demand proof that the power of attorney is still valid or may reject it as “stale” because it was executed too long ago.

There was a time when these legal documents were rarely challenged.  They were rarely exploited, as well.  Unfortunately, the number of cases of adult children outright stealing from their parents, through the power of attorney, has increased over the years, prompting lawmakers to focus more on power of attorney abuse.
Power of attorney abuse gained national attention in 2007 when the son of philanthropist, Brooke Astor, was indicted for attempting to “unjustly enrich” himself,  by using her power of attorney.  He was ultimately convicted in 2009 for, among other things, grand larceny, after stealing more than $1 million from his mother.

Banks and other financial companies began taking their own precautions by imposing tough requirements for acknowledging powers of attorney.  For instance, banks routinely reject powers of attorney that were signed more than 6 months ago and powers of attorney from out of state.  These higher standards make it tough for the well-meaning adult children to care for their parents’ affairs when necessary.
It may seem easier to just meet the bank’s requirements, rather than battle with them for acceptance.  However, in some situations, the requirements imposed by the banks are burdensome or nearly impossible to meet.  So, how do we strike a balance?

Most states have enacted statutes governing powers of attorney, but not all actually require banks and other entities to honor a power of attorney.  Lawmakers and regulators began voicing their concerns with the inconsistency of these state laws.  As a result, the National Conference of Commissioners on Uniform State Laws approved the Uniform Power of Attorney Act in 2006.  Only nine states have adopted this uniform law, including Nevada.

The Uniform Power of Attorney Act

Power of Attorney in Reno Legal Help and Guidance

If you have questions regarding a power of attorney in Reno, or any other estate planning needs, please contact Anderson, Dorn & Rader, Ltd. either online or by calling us at (775) 823-9455.